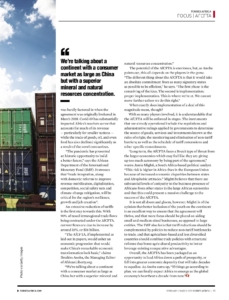 At midnight on 31 January 2020, the withdrawal of the United Kingdom (UK) from the European
Union (EU) officially came into force. The decision – Brexit – made by 52% of the British population resulted in the EU losing its second-largest economy and the Union Jack isolating itself in terms of trade, effectively quarantining in its own home. But for Africa, the move holds opportunities. Untapped export potential to the UK is large as is untapped UK export to Africa; the latter is worth more than $8 billion.

Yet, it is the new trade agreement implemented in Africa where interest should really be directed; 54 of the 55 African Union states on the continent have signed up for the African Continental Free Trade Area agreement (AfCFTA) which came into effect on the first day of 2021. Eritrea is the only country
that chose to sit out – and there are various explanations as to why, not unconnected to power and politics.

By creating the largest free trade area in the world, 1.3 billion people are now set to benefit from the elimination of tariffs on most goods, the liberalization trade of key services and the address of non-tariff obstacles to intraregional trade. The AfCFTA is estimated to bring Africa annual income gains of more than $130 billion per year.

The deal could not have come at a better time, though this was hardly factored in when the agreement was originally brokered in March 2018. COVID-19 has substantially impacted Africa’s tourism sector which accounts for much of its revenue — particularly for smaller nations — while the trade of goods, oil, and even food has also declined significantly as a result of the novel coronavirus.

“The pandemic has presented a historic opportunity to build a better future,” says the African
Department of the International Monetary Fund (IMF). “Trade integration, along with domestic
reforms to improve revenue mobilisation, digitalisation, trade integration, competition, social safety
nets, and climate-change mitigation, will be critical for the region’s resilience, growth and job
creation.”

An extensive reduction of tariffs is the first step to this. With 90% of taxed intraregional
trade flows being contracted under the AfCFTA, current intraregional trade flows are due to increase
by around 16%, or US$16 billion. “The AfCFTA, if implemented as laid out in papers, would usher an
economic progression that would make China’s remarkable economic transformation look basic,”
claims the managing editor of AfricanLiberty.org, Ibrahim B. Anoba. “We’re talking about a continent
with a consumer market as large as China but with a superior mineral and natural resources
concentration.”

The potential of the AfCFTA is enormous, but, as Anoba points out, this all depends on the players in
the game. “The different thing about the AfCFTA is that it would take an absolute commitment from
as many signatory states as possible to be efficient,” he says. “The first phase is the conceiving of the
idea. The second is implementation; proper implementation. This is where we are. We cannot move
further unless we do this right.”

What exactly does implementation of a deal of this magnitude mean, though?

With so many players involved, it is understandable that the AfCFTA will be be enforced in stages. The instruments that are already operational include the regulations and administrative rulings applied by governments to determine the source of goods, services, and investments known as the rules of origin; the
monitoring and elimination of non-tariff barriers; as well as the schedule of tariff concessions and
other specific commitments.

“Long term, the AfCFTA faces a Brexit type of threat from the largereconomies which may feel like they are giving up too much autonomy by being part of the agreement,” warns Jamie Mighti, a South Africa-based political analyst. “This risk is higher in Africa than in the EU because of increased economic disparities between states and Afrophobic attitudes.” Mighti believes that there are large levels of antipathy to the business presence of Africans from other states in the large African economies and that this could present a massive challenge to the success of the AfCFTA.

It is not all doom and gloom, however. Mighti is of the opinion that better inclusion of the youth on
the continent is an excellent way to ensure that the agreement will thrive, and that more focus should be placed on aiding small and medium businesses, as opposed to large entities. The IMF also feels that tariff reductions should be complemented by policies to reduce non-tariff bottlenecks to trade, and that agriculture-based and less diversified countries should combine trade policies with structural reforms which boost agricultural productivity to better leverage existing comparative advantages.

Overall, the AfCFTA has been packaged as an opportunity to lead Africa down a path of prosperity,
or fall into greater economic depravity that will take decades to equalise. As Anoba sums up, “If
things go according to plan, we can finally expect Africa to emerge as the global economy’s
heartbeat a decade from now.”