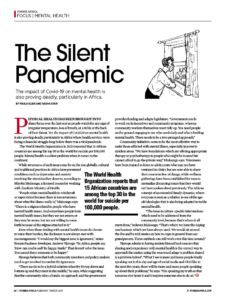 Physical health has been brought into sharp focus over the last year as people watch for any sign of
irregular temperature, loss of breath, or a tickle at the back of their throat. Yet, the impact of COVID-
19 on mental health is also proving deadly, particularly in Africa where health services were facing a
financial struggle long before there was a viral pandemic.

The World Health Organisation reports that 15 African countries are among the top 30 in the world
for suicide per 100,000 people. Mental health is a silent problem when it comes to the continent.
While awareness of such issues may be on the rise globally, cultural and traditional practices in
Africa have prevented conditions such as depression and anxiety receiving the attention they
deserve, according to Miyoba Muloongo, a licensed counsellor working with Zambia’s Ministry of
Health.

“People relate mental health to witchcraft or superstition because there is less awareness
about what the illness really is,” Muloongo says. “There is a stigma related to people who have
mental health issues. And sometimes people have mental health issues, but they are not aware; or
they may be aware, but are not willing to come forth because of the stigma attached to it.”

Even when those dealing with mental health issues do choose to voice their burden, the disclosure is
not always met with encouragement. “I would say the biggest issue is ignorance,” states business
development intern, Andrew Njoroge. “In Africa, people say, ‘How can you be sad? Be happy. Smile!’
That doesn’t solve the issue. You cannot force someone to be happy.” Njoroge believes that both
community members and policymakers need to get involved to combat the ignorance. “There needs
to be a hybrid solution whereby its top down and bottom up and they meet in the middle,” he says,
while suggesting that the community takes a hands-on approach and the government provides
funding and adapts legislature. “Government needs to work on its incentives and community
programs, whereas community workers themselves must rally up. You need people on the ground
engaging to see who needs help and who is battling mental health. There needs to be a two-pronged
approach.”

Community initiatives seem to be the most effective way to assist those afflicted with mental illness,
especially in poverty-stricken areas. “We have foundations which are offering appropriate therapy or
psychotherapy to people who might be in need but cannot afford to go the private way,” Muloongo
says. Volunteers have been trained to listen to adolescents who may not have ventured to clinics but
are now able to share their concerns free of charge, while wellness gatherings have been established
for men to normalise discussing issues that they would not have spoken about previously.

The African concept of an extended family dynamic, where everyone is seen as a relative, is one of the
age-old ideologies that is also being adopted to tackle mental health. “The issue is culture specific
interventions which need to be addressed from the community level, because that’s where it all
starts from,” believes Muloongo. “That’s where we have the coping mechanisms which we have
always used. We would sit around the fire and be told stories on how to cope in general from our
grandparents. These methods can still work even this time around.”

Njoroge concurs that sharing ones experience with mental health is the correct way to approach the
matter, using the renowned adage ‘a problem shared is a problem halved’. “What I see is more and
more people finally speaking out in this day and age of social media and I feel like in the next five
years, there will be more and more people speaking up about their problems,” says the University of
Leeds graduate who admits to having anxiety. “I’m speaking my truth so that someone else hears it
and it inspires someone else to do so.”